A combination of a destination wedding in Italy, and by some miracle, a few vacation days left, I decided to venture to Berlin.  Solo. This would mark my second international trip alone and figured a city like Berlin would be a great fit.  Plus, those who know me and have been themselves insisted that I would love it because its got a vibe similar to another favorite place of mine: Brooklyn.

I opted to stay at the Moxy (Ostbahnhof), which was a great choice due in part to its location (its about a 2-minute walk to the train station off a main line) but also because it  housed a mini mall with the best döner kebab sandwich of my life (I proceeded to eat there about once a day during my 4 day stay).   The Moxy describes itself as a social hotel, meaning the design is meant to get you out of your room and into the city exploring or hanging in one of the many common areas with fellow travelers or, of course, getting some content for the ‘Gram. 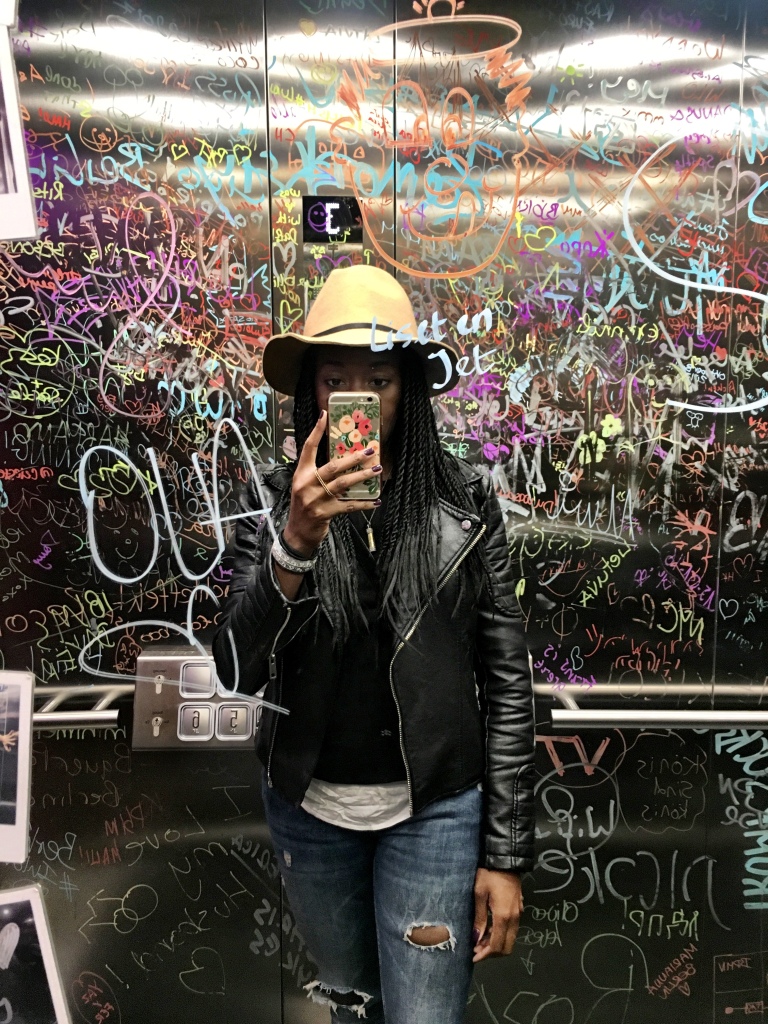 On my first day I kicked things off with a walk along the Berlin Wall, covered in murals and designs from artists all around the world.  With a cup of hot coffee in my hand, it was the perfect start to the trip. The wall was frequently dotted with themes of humanity, peace, compassion, community, and awareness – all things the world needs very much right now and always. 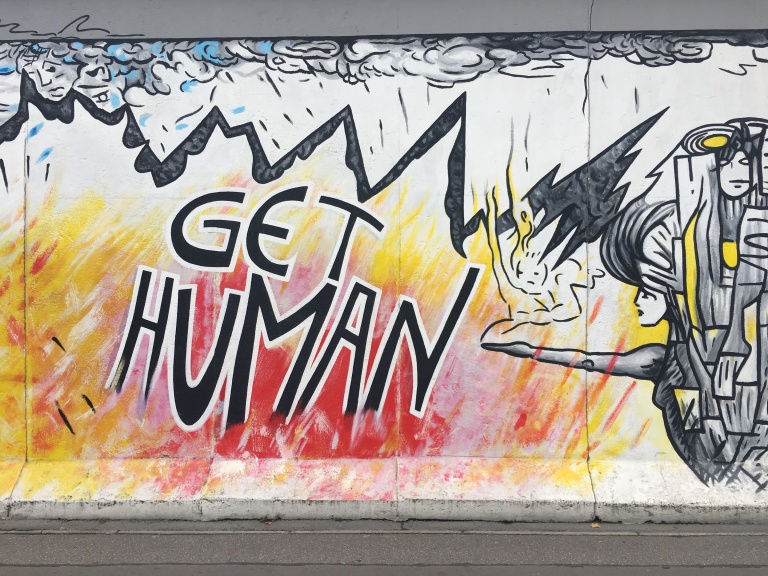 From there, it was time for breakfast at Cabslam, or California Breakfast Slam, an incredibly popular café in Berlins Neukölln neighborhood known for, what else, breakfast.  I’m typically a savory breakfast kind of gal however the menu featured a banana walnut pancake situation that I could not not try so yes, I had 2 dishes to myself in one sitting: the sweet deliciousness of the pancakes accompanied by the Huevos Rancheros, with a supporting role of bacon.  #LivingMyBestLife.

Following my double breakfast and a long walk to digest, it was time for Liquid Room.  Now before you get any ideas, let me just say: this is the most daring place I’ve ventured to alone.  Beyond museums, food and bars, I wanted an “experience” while in Berlin and Liquid Room gave me just that (I couldn’t muster up the courage to attempt admission to Berghain on my own).  Liquid Room is described as a spa with 4 different saunas, a pool with floaties for convenient lounging , DJ (Tobias L from Depeche Mode) playing transient/calm house music all inside a building designed to look like circus tents (telling).   I like to think of myself as daring, bold, and a modest risk taker however when I walked in and passed reception, the male anatomy and breasts galore greeted me.  Oh yea.  I’m in Europe so nudity prevails.

I made my way to the women’s locker room which was basically one with the mens locker room, simply divided by a hallway, leaving the men’s side fully visible meaning depending on where you stood, you might catch a breast or a peen and it was at this moment I noticed everyone coming back from the spa area was nude.  I was not prepared for nude.  I brought my bathing suit! And a cute one!  Luckily I mustered up the courage to ask a fellow spa goer the deets.  It went something like this:

Me: Excuse me, hi, hello.  Is everyone naked here?

Me: Oh…ok, so in the pool (which was going to be my first stop and where I planned to spend the majority of my time), people are naked?

Her: Oh no, in the salt-water pool you have to wear a bathing suit but everywhere else is naked.  With the exception of the bar.  You can wear a towel or robe there.

Her (as she slams her locker shut): Yeah, it’s a little confusing…enjoy! Bye!

Armed with this knowledge, I made my way to the salt water pool, grabbing a noodle for easy floating.  I managed to zen out despite the fact there were a few couples around me, no doubt using this as the appetizer for an entree of lovin’ later.  To my thankfulness, there were some groups of women, seemingly out for a girls night along with a few people on their own, like moi, to round out the mix.  I made my way to the sauna and explored other areas before deciding to get a glass of wine at the bar. Liquid Room was a relaxing, stimulating, and eye opening (only a little pun intended) experience.  Even now thinking back to it – the fact that I went there alone as a black woman (there was not one POC there during my visit), to me is quite incredible and telling about what I’m brave enough to do on my own. 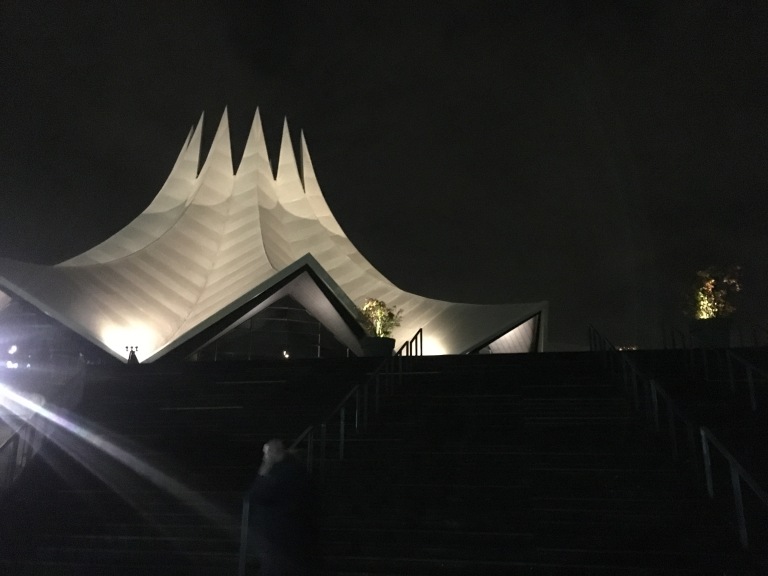 The next day started with an unplanned walk, simply strolling and catching a snack here and there.  Today’s indulgence: dinges (aka waffles) topped with fresh strawberries and confections sugar (YUM!) and their version of a hot dog: large beyond rational reason.   Clearly I do not like to be boxed into the confines of savory or sweet. 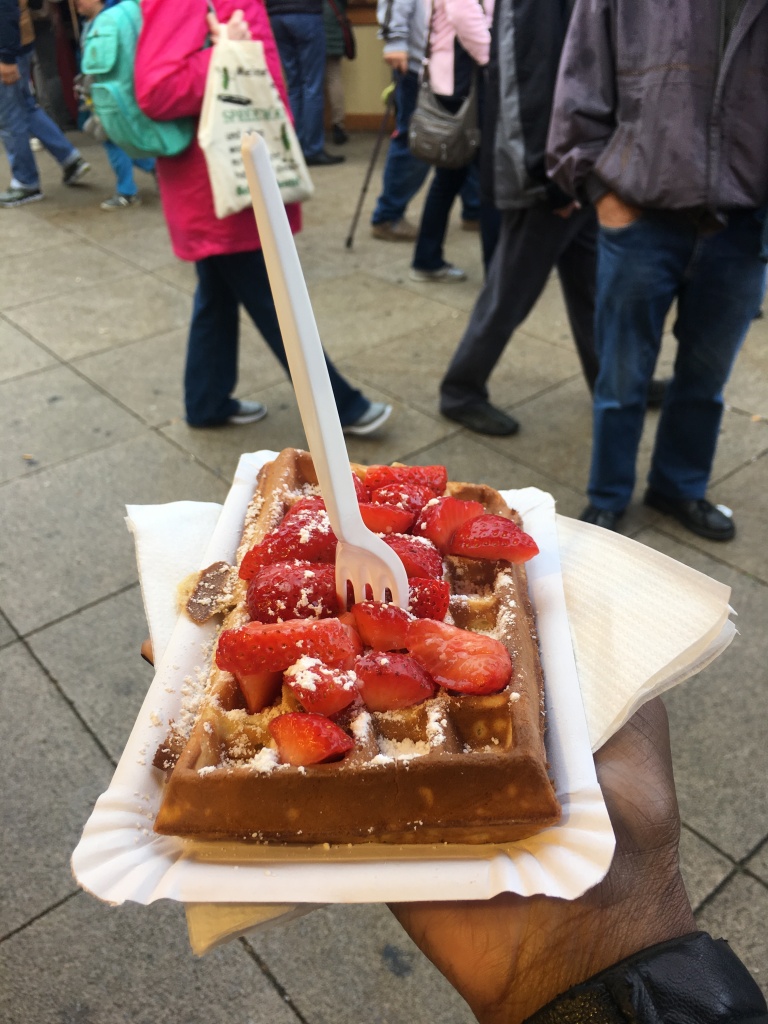 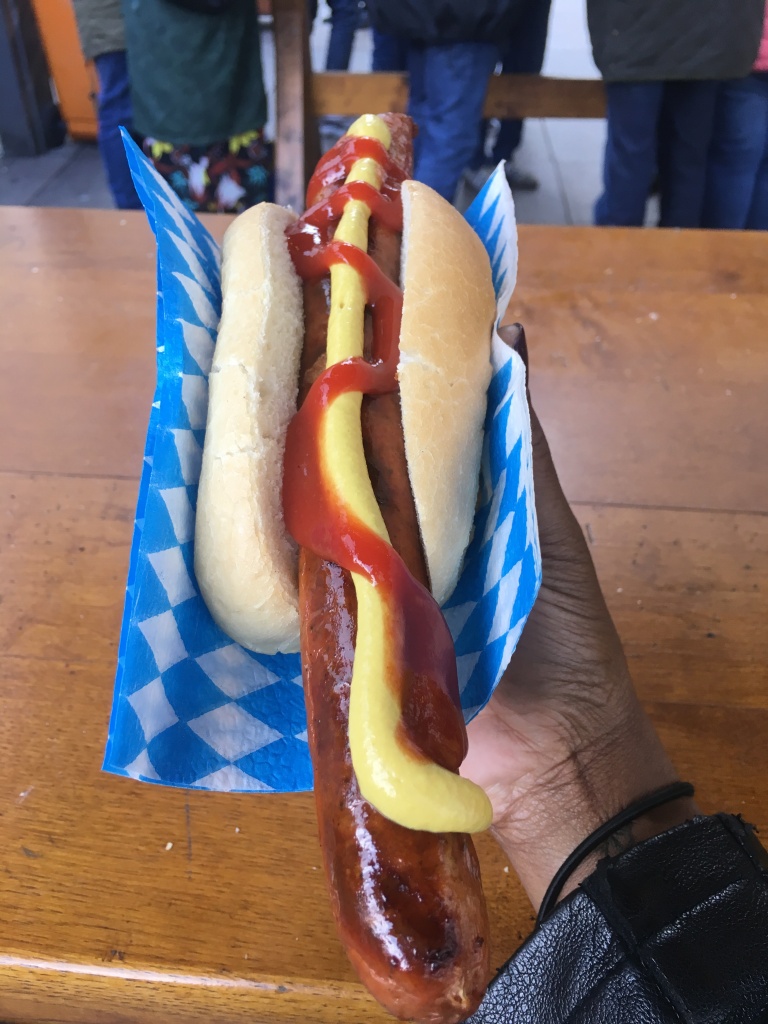 From there, I made my way to the private Kennedy Museum in Mitte, a trendy neighborhood just outside the main streets of Berlin.  According to the museum, it’s the second largest dedicated to the 35th president giving home to 1,000 documents, 2,000 photographs, and several hundred artifacts, including his crocodile Hermes briefcase, one he used up until the day of his assassination.  But why a museum of this magnitude in Berlin?  It appears to be dedicated to his famous “Ich bin ein Berliner” speech given on June 26, 1963; a speech that gave Germans reassurance they had US support and would not step back to give West Berlin to the Soviets.

Unknowingly to me, there was a powerful exhibit by documentary photographer Steve Schapiro titled Eyewitness.   Eyewitness is a celebration of the republication of James Baldwin’s book The Fire Next Time in which the essays are paired with photographs by Schapiro during the Civil Rights Movement.   To quote the publisher “Together, Baldwin’s frank account of the black experience and Schapiro’s vital images offer poetic and potent testimony to one of the most important struggles of American society.” 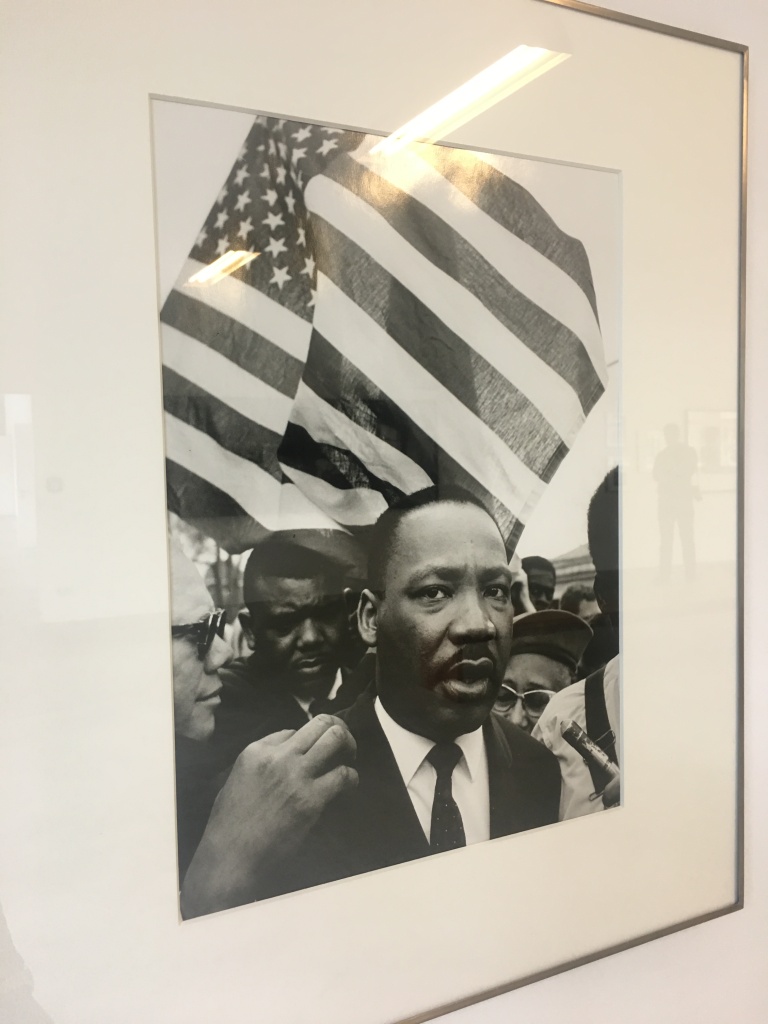 Wrapping up the day was a stop at Mogg, home to the best pastrami sandwich in town, making this a very worthy and recommended day trip.

Some other notable stops during my trip:

The Art of Banksy Exhibit (Note: this is a traveling exhibit and I was lucky enough to catch it in Berlin.  It’s lauded as the largest exhibit of original Banksy works – go see it, its amazing.)

Soho House Berlin (I’m not a member but I’m lucky to have a friend who is and happened to be in Berlin as well.  International Soho Houses put domestic ones to shame. #noshade)

Memorial to Murdered Jews of Europe (Do not miss; make time in your schedule for this) 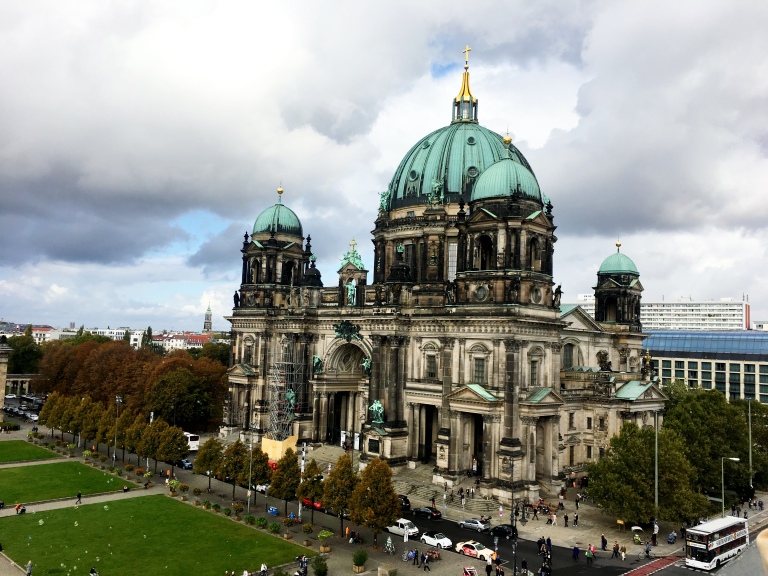 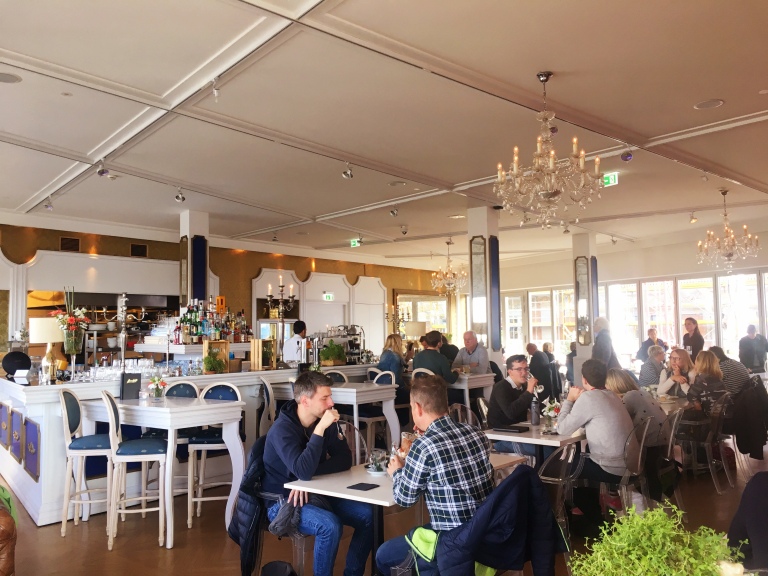 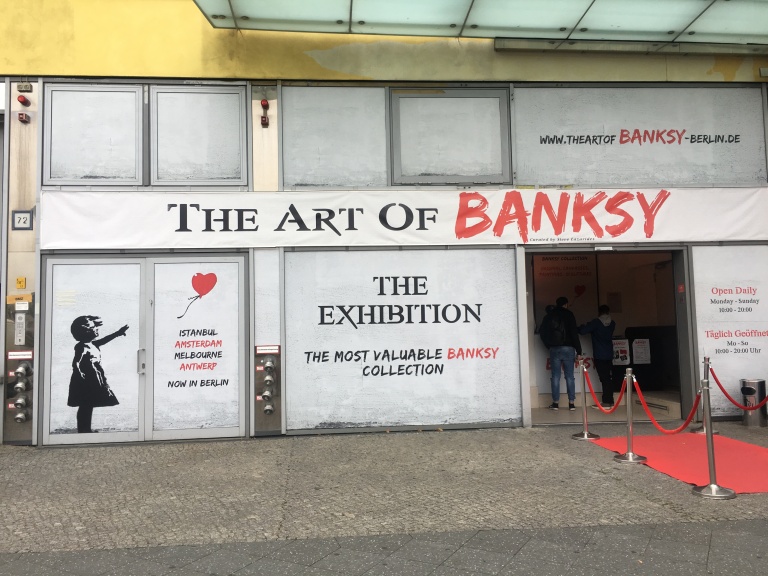 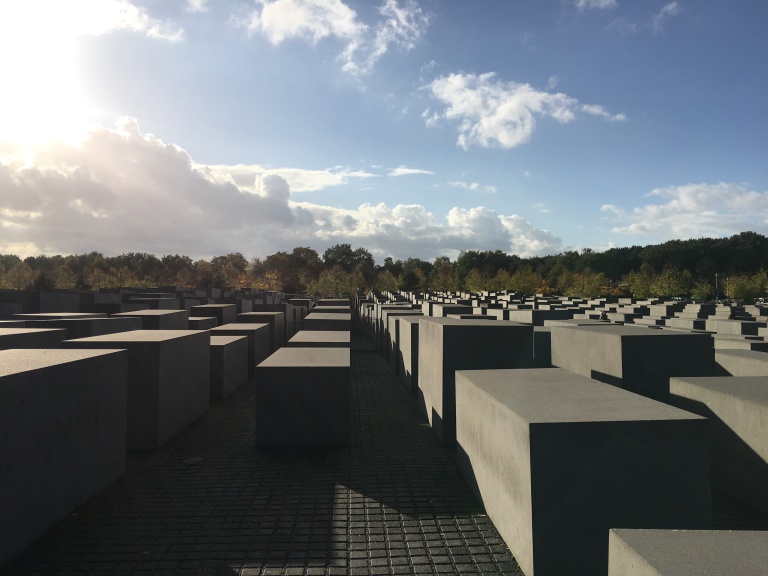 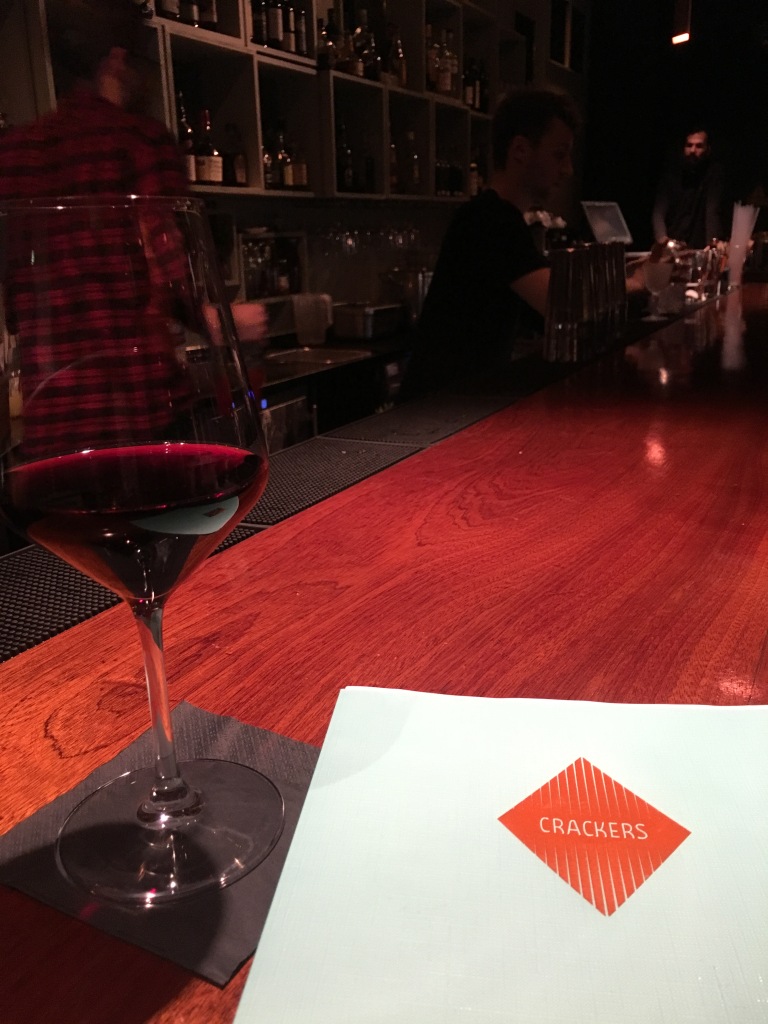